This story gets off to a bit of a slow start.  Yet another adventure that begins in the laboratory of Doc Wackey, this tale hit newsstands almost a year-and-a-half after the American bombing of Hiroshima and Nagasaki ending the Second World War.  Once it became common knowledge that the United States had developed atomic technology, all things atomic (bombs, radiation, etc.) became a MAJOR trope in superhero comics (not to mention monster movies).
Today, Doc's putting the finishing touches on a pair of seemingly regular dice.  We quickly learn, however, that they're anything but that.  In fact, they are the world's first pair of atomic dice. Attempting to calm down the (reasonably) freaked-out Gabby, Doc explains that the dice are harmless until brought within one block of the "high frequency radiations near a radio tower."  (I'm no physicist...but I'm a little skeptical of the "science" here.) Doc explains that he's disguised his atomic explosive inside the dice, "to foil international spies."  Fully convinced of his invention's incognito status, Doc and Gabby leave the dice on the lab table and head out for an afternoon stroll.
Meanwhile, at the radio station, Dave Clark is handed a hot-off-presses bulletin announcing that the notorious Max Magoo has broken out of the state penitentiary!  Magoo has left a note saying he knows he will eventually be caught, but before he is he'll accomplish his two remaining life goals:  (1) to shoot a million games of craps, and (2) to kill everyone responsible for sending him to prison (i.e., Midnight, the D.A., Judge Bloff, and the entire jury that convicted him.
No sooner do Doc and Gabby leave, then Sniffer Snoop invites himself to poke around the lab.  Upon seeing the dice, Sniffer concludes that despite Wackey's mumblings about having created an "earth-shaking" invention, the old man has really just been holed up shooting craps with Gabby.  He gives the dice a couple rolls for entertainment and, after rolling four sevens in a row, pockets the cubes and decides to had downtown to just in case "something profitable" turns up.
Doc and Gabby return to find..no dice and the prof announces, "I knew it! I've been watched by international spies!"  Doc then forcibly enlists the terrified Gabby to help him track the dice down, because "innocent lives are at stake!"
Back downtown, Sniffer tries to entice a suspiciously limp-armed passerby into a game of craps and gets a rather...ah...vigorous rebuttal.
Having returned from the radio station and donned his Midnight attire, Dave Clark is frustrated to discover that all of his housemates/partners are AWOL, leaving him to begin the search for Max Magoo alone.
Then we cut away to a scene of Magoo making good on his pledge, and surrounded by a trio of limp-armed toadies begging not to have to shoot any more craps.  The oddly-punctilious Magoo agrees...but demands that they go out and find him somebody else to play.  After all, he's gotta get these million games done so he, "start knocking guys off!"

We turn back to Doc and Gabby, still on the hunt for the missing dice.  No sooner do they spy Sniffer with the ivories, than they also see him snatched off the street and shoved into a passing car!  (Gee.  Can you guess you nabbed him?)

Doc and Gabby do their best to get to Sniffer before Magoo's thugs, but they fail.  Watching the car speed off in the direction of a radio transmitter, when they hear a sudden BAM! -- Doc and Gab fall to the ground in grief.  About this time, Midnight shows up and wants to know what's going on.

Doc informs him that Sniffer had blown up both himself and the whole town, whereupon Midnight casually notes that the town doesn't look blown up to him...but he does see a car with a flat tire up ahead and two guys dragging a third.

Immediately recovered from their grief, Wackey is ready to charge off after Sniffer explaining that they've got to get to the defective detective before he does blow up the town.
At this point, the writing has some real problems. 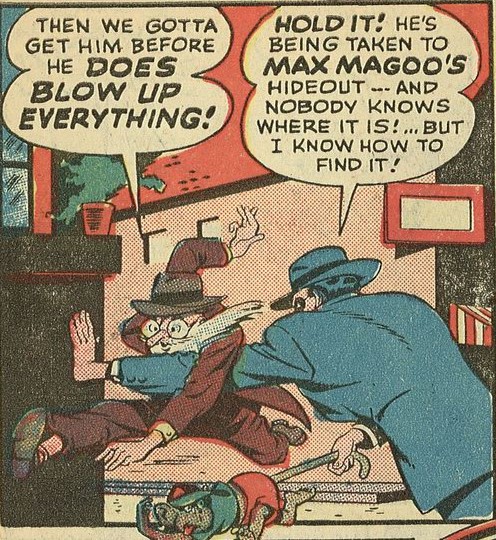 So...rather than follow the two guys dragging the third (on foot, remember), Midnight decides the smart play is to pose as a street-corner vendor selling, "the world's best liniment for sore arms."  When another of Magoo's arm-weary henchlings (one, Bones Bileski) makes a snatch for the fake liniment bottles, Midnight seizes Bones by the arm and twists it into all sorts of unholy (and anatomically impossible) contortions until Bileski gives up the location of Magoo's hideout, which turns out to be a yacht.
Onboard, Sniffer is hurled into what has effectively become the craps cabin with Magoo.  They tell Snoop that he's going to shoot craps, but the mustachioed menace could be forgiven for missing details.  He was a bit distracted by the dead chap on the floor.  Magoo coolly explains that the corpse had assumed room temperature as a result of trying to use crooked dice.  Thereupon, Sniffer tosses the macguffin dice out the nearest porthole and suggest that they use Magoo's dice for the game.
Out on deck Gabby is beaned on the head by the discarded dice, causing him to yell out in pain -- (and, curiously, suffer a punk knot on the noggin).  Thus alerted, one of the "Magoons" (see what I did there?) receives his own beaning courtesy of our azure-attired hero.
After the excitement of the moment passes, Midnight and company suddenly realize that the dice that hit Gabby were Wackey's!  Gazing helplessly over the ship's rail as the ballistic bones float ever closer to a "trans-ocean radio tower" our heroes have no chance to formulate a plan.  As it turns out, the previous ruckus has alerted the remaining Magoons and the obligatory donnybrook ensues.  After dispatching the small fry, the final mano-a-mano with Magoo is kind of a let down.  Midnight bursts in on Magoo, pops him one good time, and that's it.
About this time the dice finally explode, creating a tidal wave that carries our heroes and their criminal quarry back to shore, depositing them -- as fortune would have it -- right into the foyer of the police station
PostScript
After serving out his debt to society, Max retired to a quiet life and became known as something of a bulldog enthusiast. 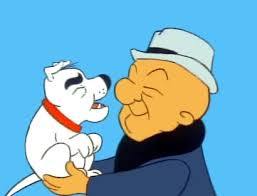 After a hiatus of over a year, I'm ready to renew posting here at the ole Spring Road Super Review!  First, let me say a special "thank you" to all my readers and friends who kept our family in your prayers.  It was a BIG help.
Last summer I landed a position that allowed me to continue supporting my family, but required moving (literally) 1,000 miles away.  While our initial plans were to sell the house and move everyone out there, for a variety of reasons that did not work out.  I began searching for another position and was recently able to secure another position, with higher pay and greater job security within commuting distance of our home.  To say we're thankful would be an understatement!
That's really all for now.  Next week we'll resume our foray through the Golden Age publishing history of Midnight with Smash Comics #68.  See you then!

Readers,
First, let me apologize for missing last week's post.
Second, let me apologize that for this week (and perhaps future weeks) this is all I have for you.
Third, let me give you a brief update that will help explain this dereliction of duty.  Ever since it's inception, this blog has been something I did on the side.
Unfortunately, I learned on May 14th of this year that I was being let go from the university where I had worked as an academic librarian for about 9 years.  Since that time, I've found myself in a bit of a fog....having to pack up and get out, having to start the job hunt, having to break the news to our early teen children that we'll almost certainly have to leave the only home they've got much memory of.

To be honest, I just don't have it in me to blog about comics right now.  If you are the praying sort, I'd greatly appreciate you sending up a few words on our behalf that some better doors will open (and soon)!
I hope that this isn't the last post I ever make on this blog, but it might be.  At the very least, posting is probably going to get a lot more sporadic until I can get my feet underneath me again.